What is the story behind the record title „Misery Sequence”.

Honestly the original reference came from dream sequence by tangerine dream but obviously our sound and the vocal genres covered on this record are the polar opposite so we thought it would be a fitting name for the final product.

It will be your record number six. From your point of view, what did you change over the years to create an own sound?

It’s weird because the writing process has always been the same with me and Nick (guitarist) doing a majority of the song writing then doing a lot of touching up innthe studio with Louis on vocals etc. I feel we just embrace different influences more and more each record and feel less afraid to appeal to a specific genre. It gets stale writing the same thing over and over so we have to challenge ourselves and make music that we are proud of.

The band is since 2005 in business. How do you motivate yourself to not break up, doing tours and writing records?

We have never really been a full time band anyway just doing tours and shows on our own terms whilst all holding full time jobs so I think that helps. Apart from that just keep it fun. Write the music you want to write for yourself before anyone else and you’ll always enjoy taking that music everywhere.

Which bands or songs had an incluence when you wrote the new CD?

There would be way too many to list. We all listen to wide varieties on our own never mind the band combined. Pop, metal, 80s, grime, hardcore the list just goes on and on.

You are a part of the BDHW family with NASTY and a lot of big HC bands. Why did you decide to work with Toni?

We have kind of know Toni through shows for years and when the time came to deal with labels for Misery Sequence we just struck it straight up and it seemed like he understood our situation and was willing to do what we needed. He’s a great guy and has smashed everything for us!

„Forgotten Soul” will be 10 years old. Do you plan to do something special to celebreate it? Repress? Live shows?

Nah I don’t think so. It’s not for any other reason than the band has changed so much since then. We are just focused on Misery Sequence and I feel putting out a new release to show how far we’ve come is a great way to celebrate the anniversary right?

I love the artwork! Can you tell us about the meaning?

It started off with a visual idea Nick had and we worked off it from there and bounced back and forth until we took it to and he made it so much better than we ever could of thought. It’s perfect for what we had in mind.

What are your next plans after the release? New music video? Touring?

We have a lot of stuff in the works but nothing quite ready to announce yet. Just keep your eyes peeled.

Our magazine is called Moshpit Passion. Do remeber your first moshpit experience or do you have a nice/silly/funny moshpit story to tell?

It’s been a pretty long time since I’ve been down there but I do remember getting my nose broken just walking through a pit to the toilet. That’s equally funny, silly and sad. 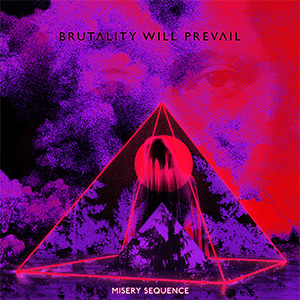